Jacob Mielke is the author of the horror play The Sacrifice. This is his first guest post for La Petite Blog.

I don’t know if you guys know this, but writing horror plays is kinda hard. It’s not so surprising, really. Just look at the horror genre in the film industry today. When was the last time you saw something truly scary? I’m talking “Oh my goodness I must cover my eyes and plug my ears lest this madness force me to evacuate bowel and bladder right here while I sob like a soap opera star watching Titanic” scary.

The last time I watched something that scary, I was fourteen. I was locked in a dark room in a dark house while The Grudge played on a TV that I couldn’t turn off or even turn down (Don’t ask). 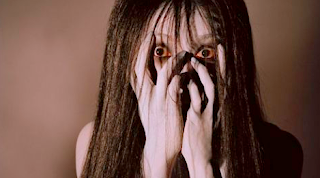 Today, I can watch that and worse with no problem at all. I am a victim of something far scarier than any horror movie…desensitization (Cue recorded scream of B-Movie actress from the fifties).

We horror fans have a (usually) inevitable result of our love of horror; we cease to scare easily. This poses a particular problem for people who specialize in entertaining audiences with horror (Like me, damn it); how are we supposed to scare an audience that’s already seen it all, heard it all, bathed in the blood of it all?

It’s ultimately up to everyone to find their own way of making it work but I have my own techniques that I’m willing to share with the world since so few theaters make good horror theatre and I can’t afford to drive to New York every month to see shows by La Petite Morgue (wink wink).

Technique # 1: Create characters the audience connects with and likes, place them in high-tension, suspenseful situations, then mutilate the shit out of them. Kind of self-explanatory, really. If the audience doesn’t like the characters, then there’s no reason for them to care whether they live or die, and all the suspense is gone. As Alfred Hitchcock once said: “There is no terror in the bang, only in the anticipation of it.” So, loss of suspense is kind of a show-killer.

Technique # 2: Bloody blood all over the bloody place. Blood on the walls, blood on the floor, blood on the characters, blood in the characters’ hair, blood in the stage manager’s coffee and sometimes even blood on the audience. Don’t get me wrong, gore effects do not make or break a show. If something isn’t scary, blood won’t make it scary but if something is scary, then blood can help make it even scarier. No offense to the theaters who can’t afford blood effects, but some of the suspense and illusion is lost when the character carving unholy symbols into his body is doing so via his mad miming skills.

Technique #3: Audience participation. This is a controversial tactic and sometimes requires the signing of a release form but there’s no way to get an audience clenched up faster than to break the fourth wall a little and include them in the hijinks. Example: I once saw a show with actors planted in the audience. They slumped in their seats as if dead and were covered in dried blood. This alone was enough to unsettle people and almost no one wanted to sit near them. They also looked wildly uncomfortable when the corpses stood up and made their way to the stage. Boom, the audience is held in suspense before the damn show even starts. That was a masterful use of suspense. If it had been thought up by me, I’d say it was perfect.

Horror audiences just don’t scare like they used to. I remember a time when one could stage Dracula and people would be genuinely frightened by it. These days, Dracula is usually presented as more of a drama than anything else.

You have to really work to overcome that desensitization. Show them something they’re not used to. Bring them out of their comfort zones. Do they expect to be scared by going to see a play and then sitting quietly in the audience until it’s over? No, of course not. So, make sure that’s not all they’re doing.
Posted by Kellie at 10:00 AM