Urban Legends in the Internet Age

By now, thanks in part to the 1998 movie, everyone knows what an urban legend is. A fictional story, presented as fact, told and retold. Sometimes they're cautionary tales - the psychopath hiding in the backseat, the creepy calls coming from inside the house, the man with the hook for a hand who preys on the parking teenagers. Always told as, "No, that really happened to a friend of my cousin / a girl in my hometown." The beautiful, organ harvesting woman and the man who wakes up in a bathtub full of ice. The alligators in the NYC sewer tunnels. The hippies who poisoned Halloween candy. Despite the lack of evidence to the contrary, these stories were passed on, and on, causing fear, even panic.

But, as Google and Snopes have become a part of our everyday lives, it has become more difficult to perpetuate an urban legend. If someone tells me about how their uncle was the victim of the high-beams gang initiation, I can whip out my smart phone and confidently tell my friend, within five minutes, that their story is complete BS.

Bill Tancer analyzed the most frequent online search queries that involved the phrase, "fear of...". This follows the assumption that people tend to seek information on the issues that concern them the most. His top ten list of fears? Flying, heights, clowns, intimacy, death, rejection, people, snakes, failure, and driving.

In a 2005 Gallup poll, a national sample of adolescents between the ages of 13 and 15 were asked what they feared the most. The question was open ended and participants were able to say whatever they wanted. The top ten fears were, in order: terrorist attacks, spiders, death, being a failure, war, heights, criminal or gang violence, being alone, the future, and nuclear war. Proving that we've come a long way since "the bogeyman" and "monsters under the bed".


And then there are the learned fears. Kids who grow up in rural areas learn to fear the city, where they fear being mugged, kidnapped, shot, car-jacked, brutally murdered, or pushed in front of a moving subway train. They are intimidated by large crowds, and have trouble sleeping surrounded by so many unsavory characters. Kids who grow up the city, however, never experience complete darkness, or complete silence, until they're in the country for the first time. They are terrified by the knowledge that if Leatherface is lurking with his chainsaw, there would be no one to run to for help or protection. Are you comforted by the fact that there is safety in numbers? Are you less likely to be a lunatic's victim if there are other people nearby? 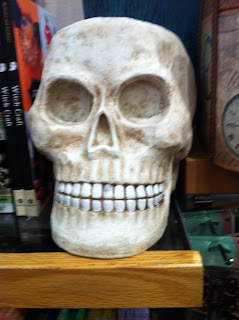 Sister, can you spare a skull? Or other miscellaneous body parts that you've got lying around?

The creators of La Petite Morgue are looking for your best collector's pieces to display at our first live horror event in July. If you have a mannequin, severed limbs, or other items that we could borrow, please, let us know. We pledge our undying gratitude.

You can write to: MissSardonicus@gmail.com

For other ways that you can help, please see: Give Us Money.

On Friday, October 13, 1307, Templar Grand Master Jacques de Molay and several Templar Knights were arrested by King Phillip of France. Most were eventually tortured to death.

On Friday, March 13, 1964, Catherine Susan (Kitty) Genovese was stabbed to death as she was returning to her Queens, New York City home in the early morning hours. She was only 29 years old. Two weeks after the murder, a newspaper article appeared that questioned whether or not neighbors heard the attack and stood by and did nothing to help the girl. The murder of Kitty Genovese and the investigation brought to light a social psychological phenomenon called "diffusion of responsibility" or "the bystander effect".

On Friday, November 13, 1970, a massive storm killed approximately 300,000 people in Chittagong, Bangladesh, and created floods that killed as many as one million in the Ganges Delta.

On Friday, October 13, 1972, a chartered plane carrying 45 rugby team members and their friends and families crashed in the Andes Mountains. Sixteen of the group survived for 72 days while the world thought they were dead, in what would become headline-making acts of cannibalism.

To begin to answer this ultimate mystery, you first need a passing familiarity with the 1961 William Castle classic, Mr. Sardonicus:

LA PETITE MORGUE, a new NYC theater company devoted to new and classic works of horror, is looking for one-act plays for a reading series which will have its first event on Friday, July 13th, 2012. Plays should be no more than 30 minutes and must be in the horror genre. No horror-comedy or spoofs.

Please send submissions to MissSardonicus@gmail.com - Unfortunately, we will only be responding to those writers we are interested in working with.

If you reside in the NYC area and are interested in directing a show, or performing at the event, please write to the e-mail address above and include a resume and headshot. We will respond to you when we are able.
Posted by Kellie at 9:41 AM No comments: