[Editor's Note: Eric LaRocca is a playwright and writer, whose short play Parasite was one of the 2014 Best of Fresh Blood festival. His fiction has been published in The Horror Zine, Dark Moon Digest, Sanitarium, and several anthologies. This is his first post for La Petite Blog.]

At a very young age I respected and admired the art form of the horror genre. Perhaps I responded so intimately to horror considering the fact that the genre is widely criticized and rebuked by most mainstream audiences and at a very young age I too felt very disenfranchised and unequal to my peers. Perhaps I responded to the genre because horror is an art form that has struggled desperately to be taken seriously and I too felt very ineffectual and disrespected in my youth. Regardless, since childhood I have done all I can to study the genre and educate myself by watching and reading the masterworks and miscarriages of this widely lesser appreciated genre.

This list is certainly not conventional. Perhaps you’re entirely unfamiliar with some of these films. Some of you might even be saying, “Where’s Rosemary’s Baby? Where’s The Exorcist? What about Psycho?” I am by no means suggesting that the following list of cinematic works are the most flawless representations of the genre and deserve to trump all other lists of horror films. These films merely resonated with me on a personal level and are still greatly influential on my path as a young writer and enthusiast of the art form. These are films to which I look for inspiration. My hope is that you will read the list, check out some of the films, and develop and share your own opinions. 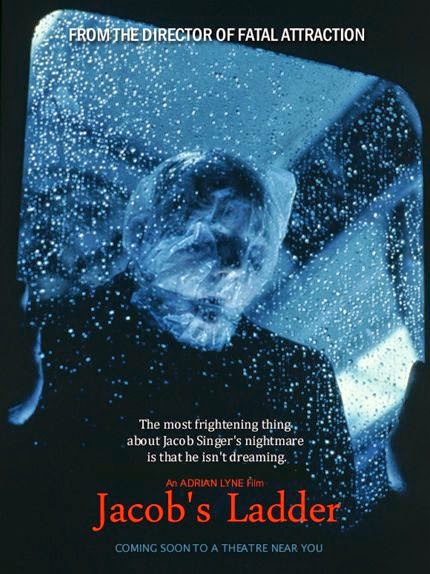 Coming in at number 10 on my list is what I consider to be the greatest psychological horror film of all time – Adrian Lyne’s Jacob’s Ladder. Lyne’s surreal and frightening exploration into the depths of a troubled human mind concentrates on a veteran of the Vietnam War, Jacob Singer (Tim Robbins), who is mourning the loss of his child while relentlessly being tormented by unusual flashbacks and nightmarishly grotesque hallucinations. Struggling to preserve his sanity, he struggles to decipher the truth and reality of his past and present while contending with his dreams and concept of death. 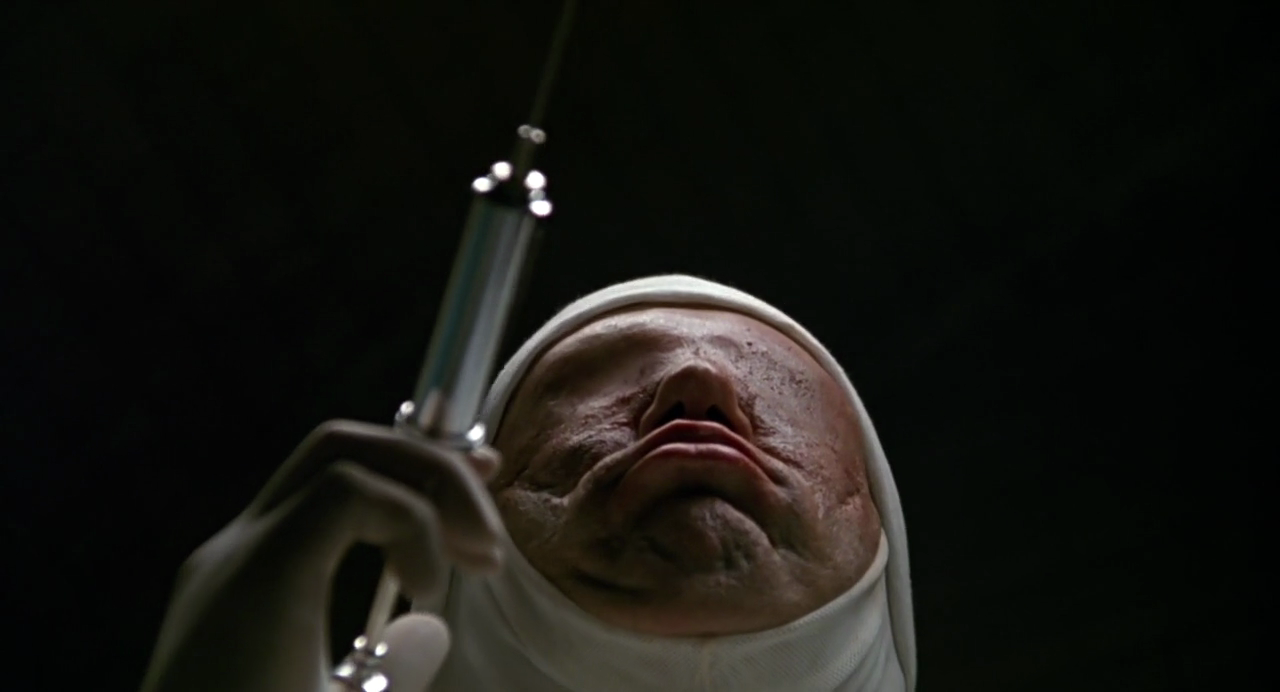 While the film excels with regard to cinematography and stellar performances by the cast, the film is particularly exceptional at disorientating the viewer so that we, the audience, experience and respond to the very same confusion Jacob experiences with every nightmarish vision. Many who have viewed the film already might agree that the film is the cinematic equivalent of a “bad trip.”

Opinions are certain to be divided when it comes to reflecting upon and analyzing this film. Some consider it a work of genius and true testament to the sub-genre of psychological horror while others dismiss it as disappointing and absurd. Regardless, I consider the film a visceral and somber excursion into the realm of psychological horror with profoundly engaging characters. The film’s intelligence is principally exemplified in its aptitude to effectively shift between moments of astounding eeriness and overwhelming despair. 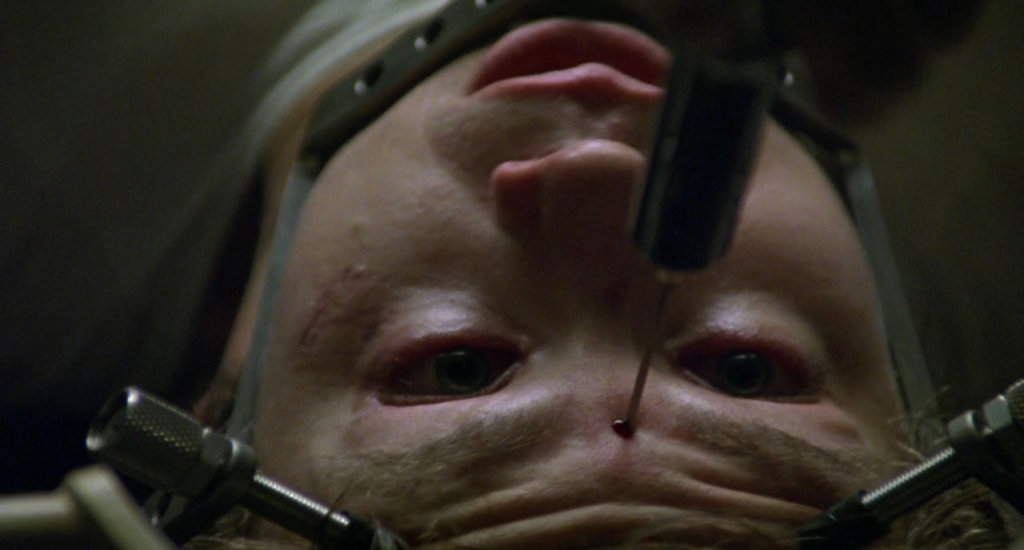 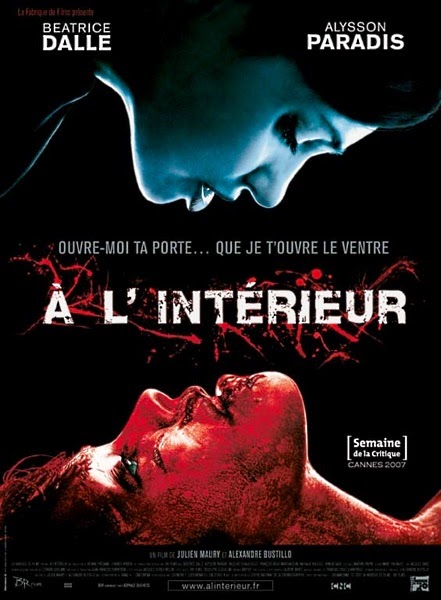 In recent years, French directors have revamped the methods in which the present effective horror to the masses by removing the subtle creepiness of classic masterpieces such as Les Diaboliques (The Devils) (1955) or Les Yeux Sans Visage (Eyes Without a Face) (1960) and replacing the predictable delicateness of French horror with torrents of arterial spray. A new sub-genre in the field of horror has since been developed by the French aptly entitled, “New French Extremity.” These films, though not all exclusively restricted to the horror genre, are a new and far more audacious wave of film-making that show explicit violence/carnage and graphic depictions of sexuality. Understandably, most of these films cause controversy upon their release and are subsequently censored greatly. Bustillo and Maury’s À l'intérieur (Inside) is, without a doubt, a prime example of the horrifying lengths to which “New French Extremity” can go. 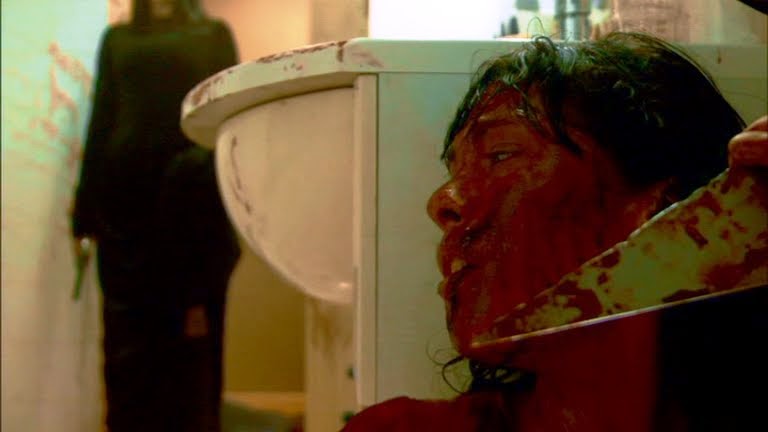 The premise of À l'intérieur is fairly straightforward. A young pregnant woman is stalked in her house by a mysterious female assailant who wants her unborn child. While the idea is simple, the film is an engaging and frightening 82 minute jaunt into unadulterated terror. Tapping into our inherent fear of any personal haven being desecrated by an outside and seemingly unstoppable force, the film is a captivating spin on the tired home-invasion sub-genre. The film especially taps into deeply ingrained fears in the female psyche regarding attachment to, and permanent separation from, newborns.

À l'intérieur is a ferocious and unrelenting assault on the eyes with countless portrayals of graphic mutilation and torture. It is possibly one of the most disturbing and unsettling films you will ever see and is not to be missed if you enjoy your films wet with copious amounts of redness. 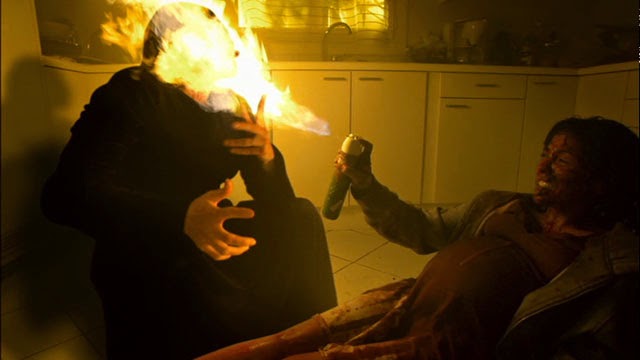 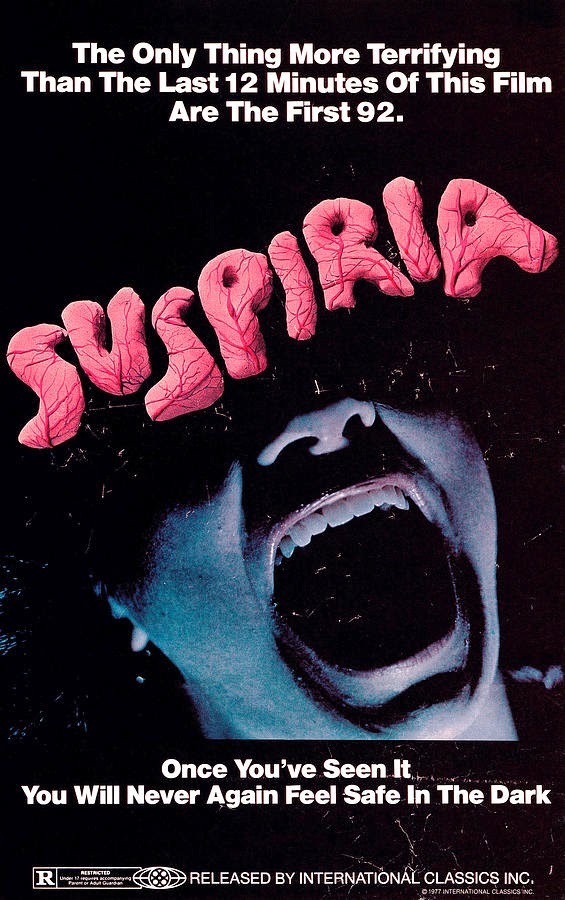 Italian director Dario Argento is quite possibly one of the last remaining classic masters of horror who has significantly contributed to the contemporary growth and evolution of the genre. While the Rome-born director is often classified among most film enthusiasts as “the Italian Alfred Hitchcock,” I’ve never understood the comparison as Hitchcock pieces are the most meticulously calculated story-lines, whereas Argento’s catalog of work emphasize sound and artistic vision as opposed to the development of coherent plot and character. Nonetheless, as a work of cinematic art, Suspiria is an awe-inspiring feat in film-making with a cornucopia of surreal and grotesque imagery that is not easily forgotten. 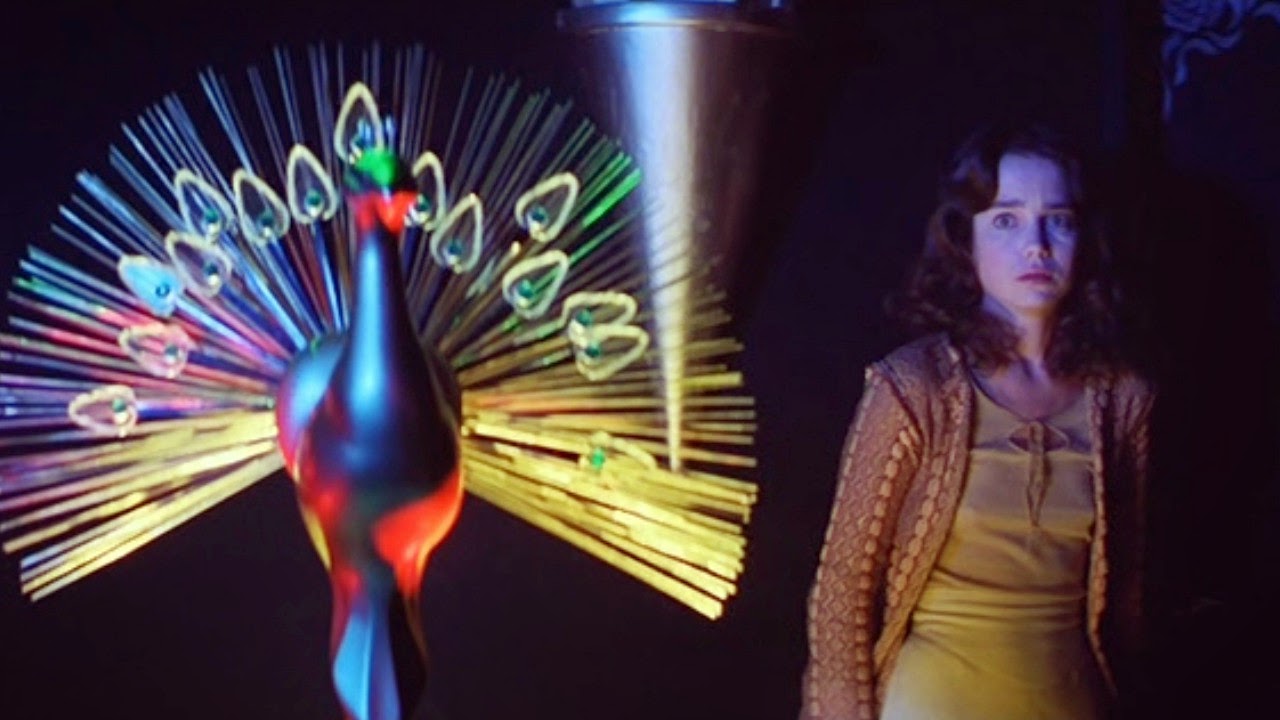 The plot follows a young American ballet student (Jessica Harper) who has recently transferred to a prestigious German ballet academy and soon discovers that the school is directed by a coven of witches. Horror author Ramsey Campbell has said that Suspiria could easily be described as, “the first punk horror movie.” In fact, many have agreed that Suspiria is comparable to a Walt Disney fairy-tale. This comparison stands to reason as several film historians have asserted that Argento modeled his original screenplay after Snow White and the Seven Dwarves.
Although Argento went on to primarily direct giallo thrillers (TheCard Player, Trauma, The Stendhal Syndrome), he maintained a visual aesthetic in Suspiria that has not since yet been matched in horror cinema. While creating some of the most inventive and outlandish death scenes in cinematic history, Argento accentuated lavish and garish colors that enhanced the quality of the visuals and rendered every scene surreal in its nature. Today, Suspiria remains a cult classic and is primarily popular among those who prefer the more alternative and avant-garde type of cinema. Regardless, the film is a masterpiece of sight and sound and features one of the greatest and most unique scores ever written for film by progressive rock band, Goblin. 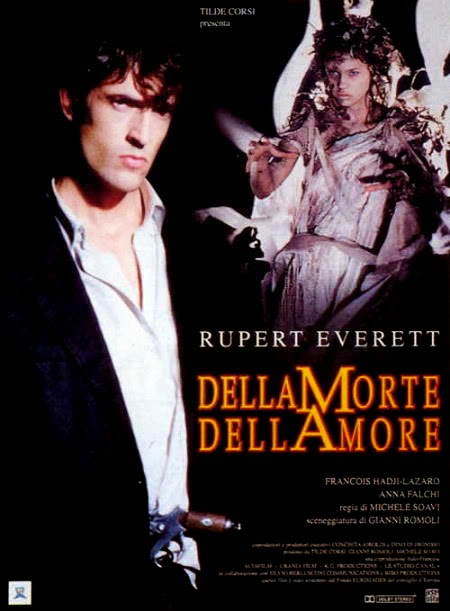 One of Argento’s most promising and talented protégés was a young Italian director by the name of Michele Soavi. The young Soavi was an assistant director on several of Argento’s pictures, such as Tenebrae, Phenomena, and Demons. It wasn’t long before Soavi stepped out from behind Argento’s shadow and helmed production of his directorial debut, a highly underrated slasher entitled Stage Fright. Soavi’s crowning achievement, however, would come in 1994 with the release of the comedy-horror film, Dellamorte Dellamore (commonly referred to as simply Cemetery Man).

Based on the 1991 novel by Tiziano Sclavi (author of Dylan Dog), Dellamorte Dellamore is indisputably the most atypical zombie film ever made. In total honesty, zombies have never generated a great deal of interest in me. I can certainly understand why shows like The Walking Dead and films such as Dawn of the Dead garner public attention and critical acclaim; I simply have never been interested in the tropes of the quintessential zombie film. Regardless, Dellamorte Dellamore is the ultimate exception.

The film follows the plight of a disgruntled and lonely cemetery caretaker (Rupert Everett) who desperately searches for love while defending a small Italian town from an infantry of zombies. Although the plot may sound uninspired and disappointing, the film is anything but. Soavi’s masterpiece artfully combines elements horror with hilarious comedy, all the while offering the audience a catalog of exciting and engaging characters and visionary cinematography. 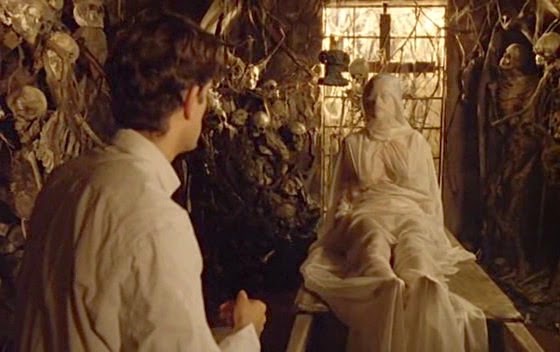 The film’s intelligence is not merely limited to its host of surreal and symbolic cinematography. The piece’s true intellect is observed in its articulation of several very relatable human issues, such as the actuality of being alive and connecting and interacting with others. The film touches on these issues even while maintain an often difficult balance between horror and comedy. Perhaps I responded so intimately to the piece compared to other zombie offerings simply because Dellamorte Dellamore is chiefly about “the living” as opposed to “the dead” and artfully analyzes the human experience and difficulty of connecting with our living brethren. 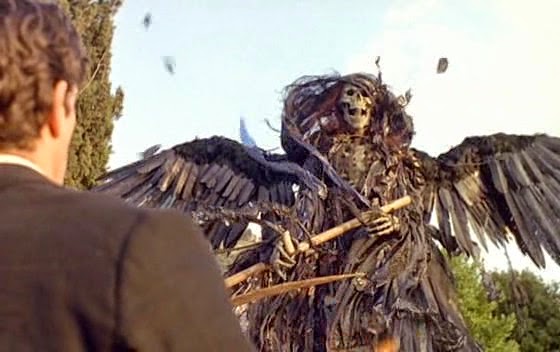 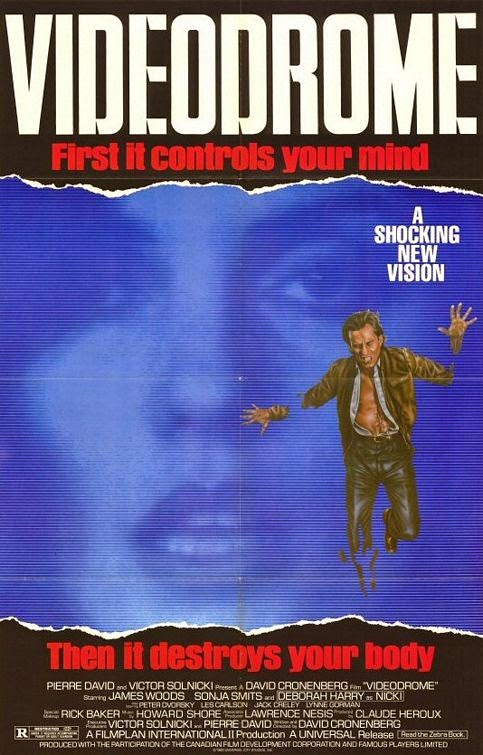 Although Cronenberg’s 1983 Videodrome is commonly classified as a science-fiction film, many film scholars would agree that the piece is a critical work in the development of the “body horror” subgenre. For those who aren’t familiar with the subgenre, “body horror” commonly deals with and explores the decay and degeneration of the human body. These works primarily deal with, but are not limited to, disease, decay, parasitism, self-mutilation, transformation, etc. Such notable films exploring this seemingly unconventional subgenre include Alien, Cabin Fever, and The Thing. For those of you who came to The Best of Fresh Blood 2014 – my piece, Parasite, was a piece heavily influenced by the ideas and tropes commonly associated with “body horror.” Cronenberg, however, is the undisputed master of body horror. His catalog of films includes fascinating explorations into the realm of the human body and its inherent fragility with regard to disease, infection, and decay.
Videodrome is possibly his most captivating and sensational work in the body horror sub-genre.

Cronenberg's screenplay follows the president of a small television station (a young James Woods) who discovers a broadcast signal displaying non-stop graphic depictions of mutilation, torture, and sex. As he gradually uncovers the origin of this undiscovered signal, he slowly descends into a hallucinatory realm where he struggles to decipher grotesque fantasy from reality.

Videodrome is by no means a conventional film and will, therefore, indeed not appeal to most. Those anticipating a film with a tight, concise, coherent narrative and immediately likable characters will undoubtedly be disappointed. Those, however, with more eccentric film tastes who appreciate films with a point of view that emphasize certain social issues through ostentatious symbolism will be exhilarated. In short, Videodrome is a piece that emphasizes the horrifying effects of relentless media consumption and the hazards associated with ever-expanding technology. In fact, the film rings truer today than perhaps it did when it was released in 1983. It is a daring, audacious and explosive journey into dark territory and also features some of the most inventive and captivating special effects in film history designed by acclaimed special effects artist, Rick Baker (famous for his work on An American Werewolf in London). Videodrome has a distinct philosophy and therefore, like the signal broadcast in the piece, is dangerous in nature. 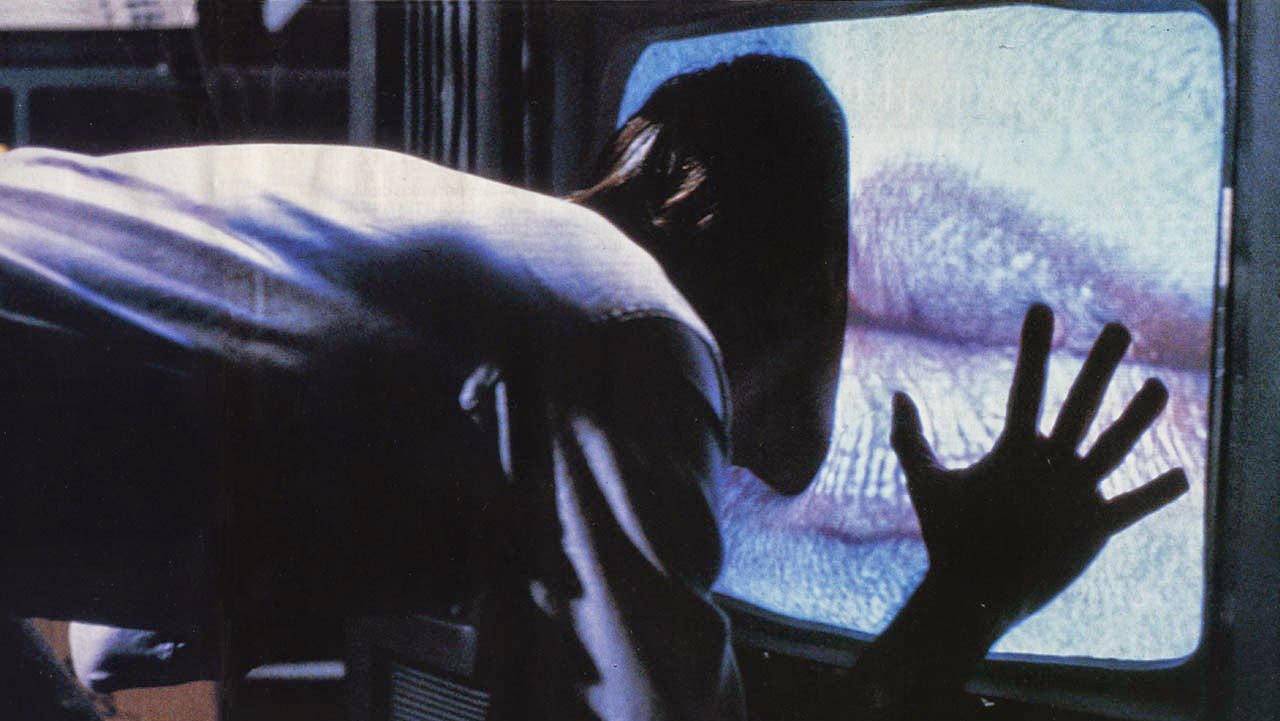 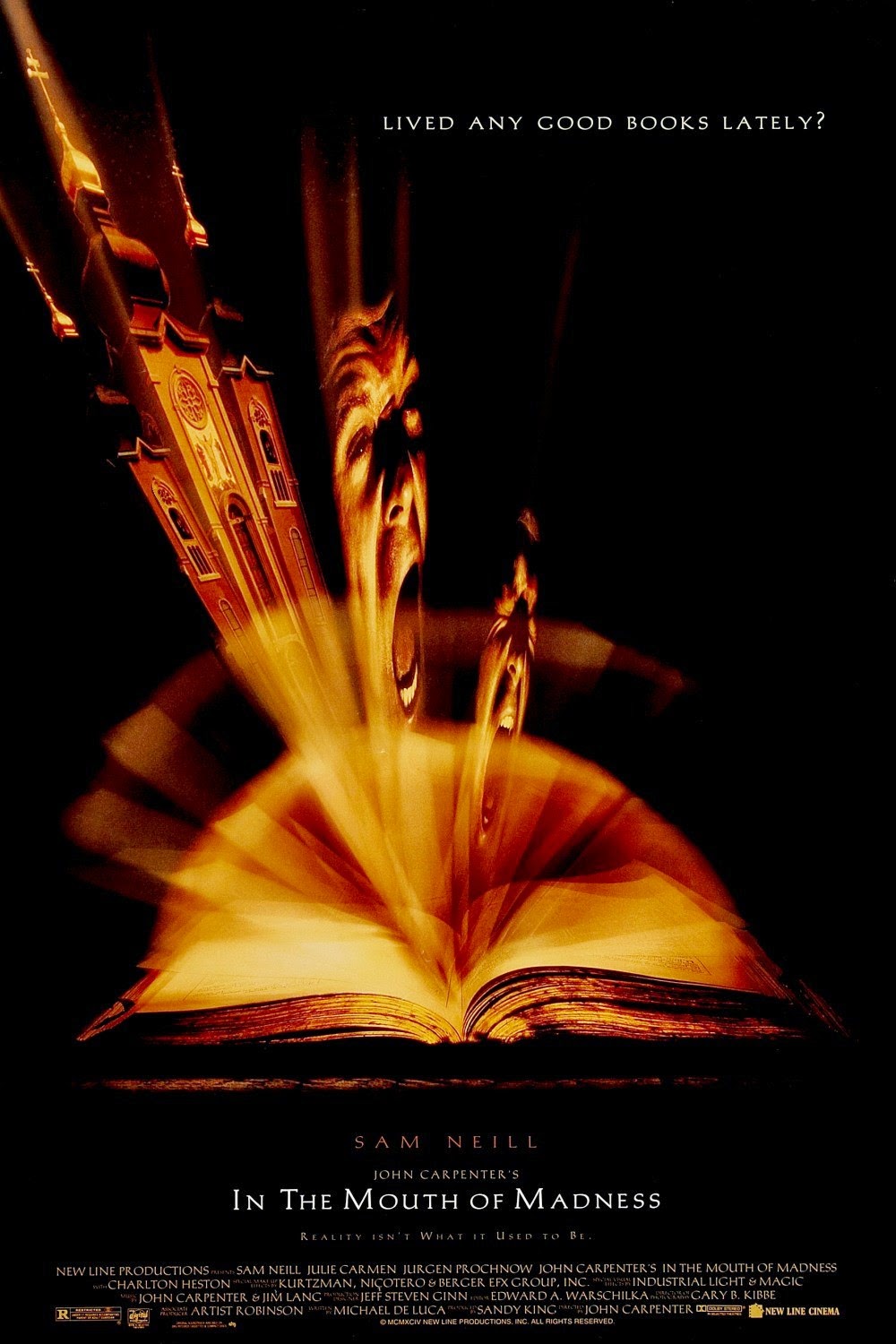 Have you read Sutter Cane? If not, consider yourself fortunate. John Carpenter's final installment in his Apocalypse trilogy (preceded by The Thing and Prince of Darkness) is a frightening homage to Lovecraft as he guides the viewer into another dimension of indefinable terror.

Check back soon for Part 2 where I discuss my Top 5! In the meantime, you can also check out Kellie's Favorite 15 Horror Films, or Chelsea's Top 10 Scariest Women in Film! Or, feel free to leave me some comments and let me know what you think of the films I mentioned.