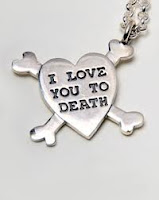 Envy the Dead: A Post-Zombie-Apocalypse Musical by Kellie Powell

The idea: I'm writing a zombie musical, despite not having the ability to compose music. But that's okay, right? Someone else can do that part. Right?

Feasibility: As of now, I've written 35 pages of dialogue and lyrics. And my pal Alex from the Zombie Mafia has written power chords for the opening number, in which people sing about fighting zombies while actually fighting zombies. So, it's coming along. Will it ever get finished? Will it ever be produced? That really all depends on how much help and funding I'm able to secure. But I feel optimistic about it. Everyone loves zombies, right?

is a great movie, and it might make a fantastic live show. It takes place mostly in one location, and has a very small cast. If you thought it was creepy on a screen, think how creepy it would be to watch that plot unfold live in front of your eyes.

Feasibility: We're still looking into whether or not it's possible to obtain the rights to adapt it. However, it looks like people have done it before, which would indicate it is possible to do (without getting sued).

The idea: Well, basically, it would be like Invasion of the Body-Snatchers, but with hipsters.

Feasibility: That depends on whether we decide it's a live show, a video series, an ARG, or a podcast. Or all of the above.

Of course, we have lots and lots of other ideas, too. (At some point, we'd like to stage an exorcism.) But those will have to wait. Right now, I've got to get back to concentrating on the tasks immediately at hand - reading script submissions, screening directors, and looking for the cheapest possible space to hold auditions. Until next time - see you in your nightmares!*

* Yes, just like our periods. What? You know you were thinking the same thing.
Posted by Kellie at 2:18 PM